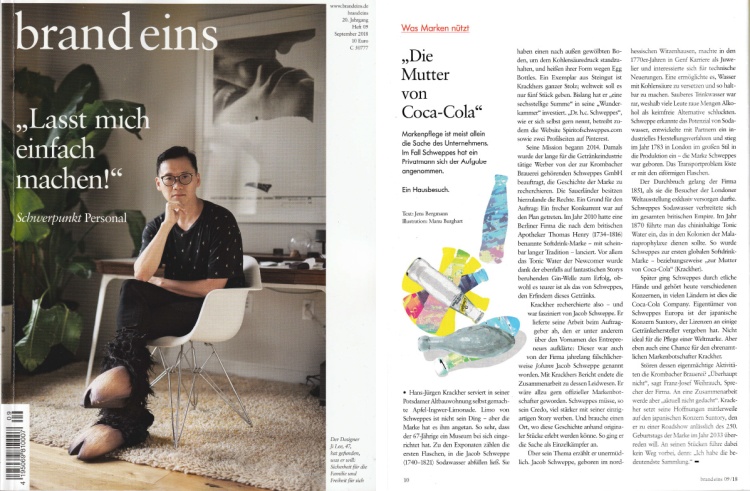 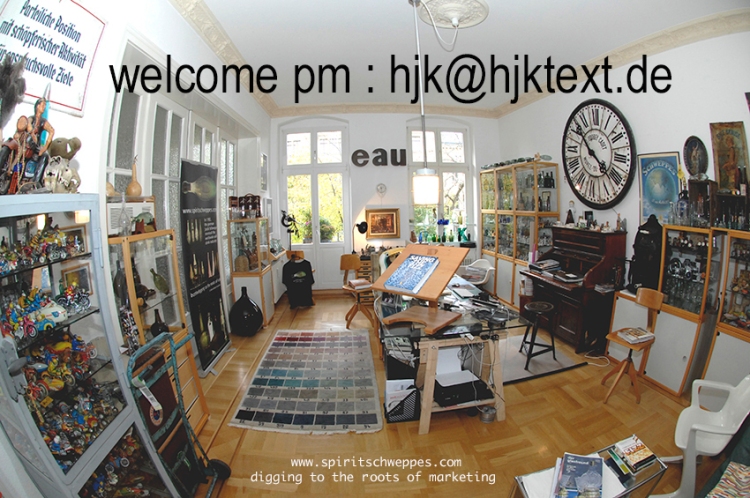 “The mother of Coca-Cola”
Brand care is usually the sole responsibility of the company. In the case of Schweppes, a private citizen has taken on the task. A home visit.
Text: Jens Bergmann
Illustration: Manu Burghart

• Hans-Jürgen Krackher serves homemade apple and ginger lemonade in his apartment building in Potsdam. Limo von Schweppes is not his thing – but the brand has done it to him. So much so that the 67-year-old has set up a museum with him. The exhibits include the first bottles in which Jacob Schweppe (1740-1821) filled soda water. They have an arched bottom to withstand carbonic acid pressure and are called Egg Bottles because of their shape. A stoneware specimen is Krackher’s pride; There are only five of them worldwide. So far, he has invested “a six-figure sum” in his “Wunderkammer”. “Dr. h.c. Schweppes “, as he likes to call himself, also runs the website spiritschweppes.com and two profile pages on Pinterest.
His mission began in 2014. At that time, the advertisers, who had been working for the beverage industry for a long time, were commissioned by Schweppes GmbH, which belongs to the Krombacher brewery, to research the history of the brand. The Siegerländer own in this country the rights. One reason for the order: A naughty competitor had stepped on the plan. In 2010, a Berlin-based company had launched the soft drink brand named after the British pharmacist Thomas Henry (1734-1816) – with a seemingly long tradition. Above all, the newcomer’s tonic water has become a success thanks to the gin wave, which is also based on fantastic stories, although it is more expensive than that of Schweppes, the inventors of this drink.
Krackher researched – and was fascinated by Jacob Schweppe. He delivered his work to the client, which he enlightened, inter alia, on the first name of the entrepreneur: this was for years incorrectly named by the company Johann Jacob Schweppe. With Krackher’s report, the collaboration ended in his grief. He would have liked to become an official brand ambassador. Schweppes, according to his credo, must advertise much more strongly with his unique story. And need a place where this story can be experienced with original pieces. So he tackled the matter as a lone fighter.
He tirelessly talks about his topic. Jacob Schweppe, born in Witzenhausen, North Hesse, made his career as a jeweler in Geneva in the 1770s and was interested in technical innovations. One made it possible to aerate water and make it so durable. Clean drinking water was rare, which is why many people swallowed rough amounts of alcohol as a germ-free alternative. Recognizing the potential of soda water, Schweppe developed an industrial manufacturing process with partners and entered production in London on a grand scale in 1783 – the Schweppes brand was born. The transport problem he solved with the egg-shaped bottles.
The company achieved its breakthrough in 1851, when it was exclusively able to supply visitors to the London World’s Fair. Schweppes soda water spread throughout the British Empire. In 1870, the quinine-containing tonic water was introduced, which was to serve in the colonies of malaria prophylaxis. So Schweppes became the first global soft drink brand – referring to “the mother of Coca-Cola” (Krackher).
Later Schweppes passed through several hands and today belongs to various corporations, in many countries this is the Coca-Cola Company. Owner of Schweppes Europe is the Japanese company Suntory, which has granted licenses to some beverage manufacturers. Not ideal for the care of a global brand. But also a chance for the volunteer brand ambassador Krackher.
Do the Krombacher brewery interfere with its unauthorized activities? “Not at all,” says Franz-Josef Weihrauch, spokesman for the company. At a cooperation but “currently not thought”. Meanwhile Krackher puts his hopes on the Japanese company Suntory, whom he wants to persuade to a roadshow on the occasion of the 250th anniversary of the brand in 2033. There is no way around his pieces, because: “I have the most important collection.” —