My marketing cabinet spiritschweppes.com is all about innovation, entrepreneurship and global success – illustrated by examples of historical water marketing. The international trade magazine ABC Antique Bottle Collector from the summer of 2019 has dedicated a four-page article to the section “Aqua Mirabilis – Waters with effects”. Thanks to early-glass expert Mark Nightingale, http://www.antiquebottlecollector.com 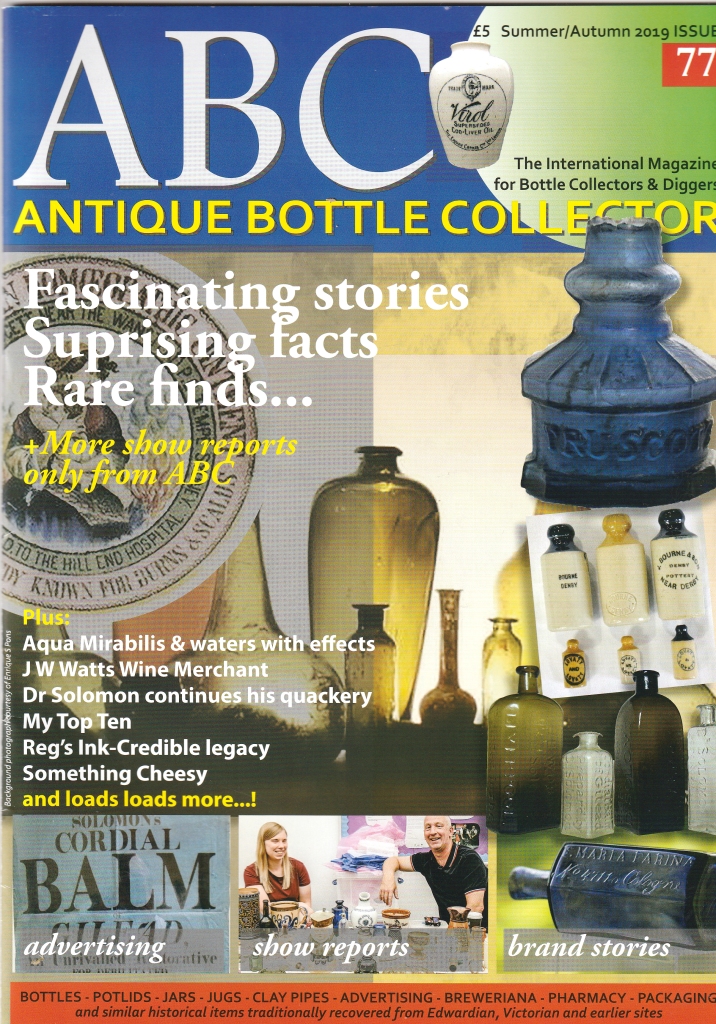 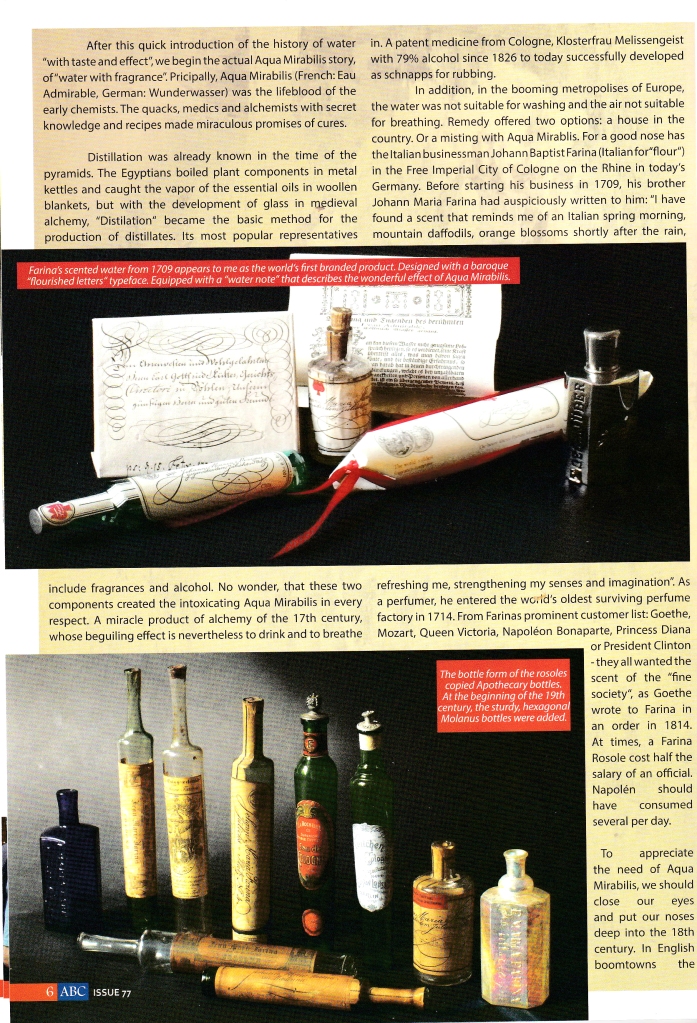 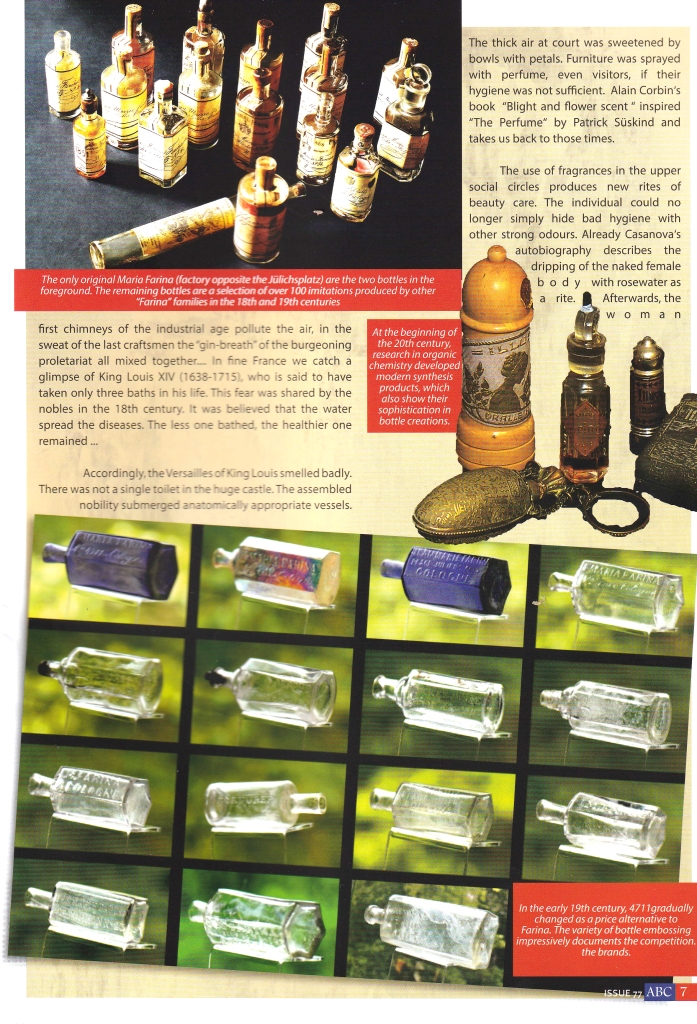 Published by the leading Marketing-Journal of Germany, brand eins.

“The mother of Coca-Cola”

Brand care is usually the sole responsibility of the company. In the case of Schweppes, a private citizen has taken on the task. A home visit. 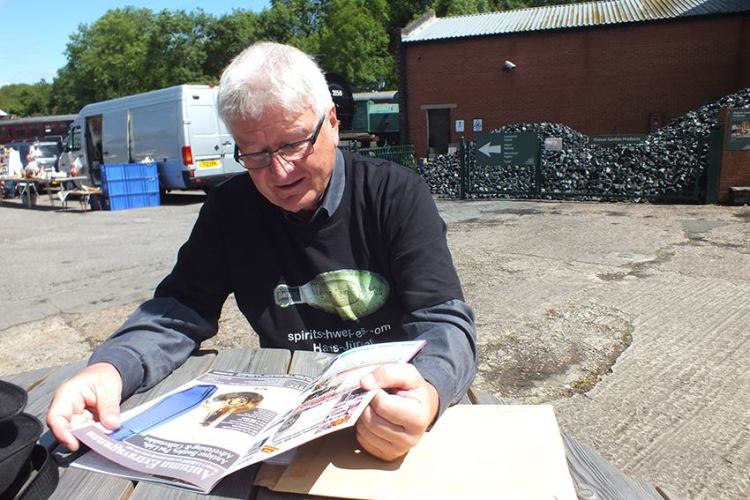 Hans-Jürgen Krackher serves homemade apple and ginger lemonade in his old apartment in Potsdam. Limo von Schweppes is not his thing – but the brand has done it to him. So much so that the 67-year-old has set up a museum with him. The exhibits include the first bottles in which Jacob Schweppe (1740-1821) filled soda water. They have an arched bottom to withstand carbonic acid pressure and are called Egg Bottles because of their shape. A stoneware specimen is Krackher’s pride; There are only five of them worldwide. So far, he has invested “a six-figure sum” in his “Wunderkammer”. “Dr. h.c. Schweppes “, as he likes to call himself, also runs the website spiritschweppes.com as well as two profile pages on Pinterest.

His mission began in 2014. At that time, the advertisers, who had long been active in the beverage industry, were commissioned by Schweppes GmbH, which belongs to the Krombacher brewery, to research the history of the brand. The Siegerländer own in this country the rights. One reason for the order: A naughty competitor had stepped on the plan. In 2010, a Berlin-based company launched the soft drink brand named after the British pharmacist Thomas Henry (1734-1816) – with a seemingly long tradition. Especially the tonic water of the newcomer became a success thanks to the gin wave, which is also based on fantastic stories, although it is more expensive than that of Schweppes, the inventor of this drink.

Krackher researched – and was fascinated by Jacob Schweppe. He delivered his work to the client, which he enlightened, inter alia, on the first name of the entrepreneur: this was for years incorrectly named by the company Johann Jacob Schweppe. With Krackher’s report, the collaboration ended in his grief. He would have liked to become an official brand ambassador. Schweppes, according to his credo, must advertise much more strongly with his unique story. And need a place where this story can be experienced through original pieces. So he tackled the matter as a lone fighter.

He talks tirelessly about his topic. Jacob Schweppe, born in Witzenhausen, North Hesse, made his career as a jeweler in Geneva in the 1770s and was interested in technical innovations. One made it possible to aerate water and make it so durable. Clean drinking water was rare, which is why many people swallowed rough amounts of alcohol as a germ-free alternative. Recognizing the potential of soda water, Schweppe developed an industrial manufacturing process with partners and entered production in London on a grand scale in 1783 – the Schweppes brand was born. The transport problem he solved with the egg-shaped bottles.

The company made its breakthrough in 1851, when it was exclusively able to supply visitors to the London World’s Fair. Schweppes soda water spread throughout the British Empire. In 1870, the quinine-containing tonic water was introduced, which was to serve in the colonies of malaria prophylaxis. So Schweppes became the first global soft drink brand – referring to “the mother of Coca-Cola” (Krackher).

Later Schweppes passed through several hands and today belongs to various corporations, in many countries this is the Coca-Cola Company. Owner of Schweppes Europe is the Japanese company Suntory, which has granted licenses to some beverage manufacturers. Not ideal for the care of a global brand. But also a chance for the volunteer brand ambassador Krackher.

Do the Krombacher brewery interfere with its unauthorized activities? “Not at all,” says Franz-Josef Weihrauch, spokesman for the company. At a cooperation but “currently not thought”. Meanwhile Krackher puts his hopes on the Japanese company Suntory, whom he wants to persuade to a roadshow on the occasion of the 250th anniversary of the brand in 2033. There is no way around his pieces, because: “I have the most important collection.” —

DIGGING THE FIZZY “4 S” BEFORE COCA COLA
01 SPA NO 1 natural mineral water, Belgium, from the early 18c, first traded worldwide north of the Alps in free-blown glass bottles with cork closure.
02 SELTERS NO 1 natural mineral water, 18./19. Century. From source-rich areas in Germany as later Apollinaris worldwide in clay pitchers with leather / tar secured cork closure distributed.
03 J. SCHWEPPE NO 1 approx. 1830 industrially produced mineral water, until ca. 1910 eggbottles with Blop-Top. The World’s First Marked Soft Drink Bottle,, Company Address Margaret Street, London. J.Schweppe & Co. will be at the Great Exhibition 1851 in London with the creation of a giant soda fountain known worldwide as a fizzy soft drink.
04 SINALCO NO 1 = “sine alcohole” since 1907 with clip closure and natural fruit essences is growing into the leading soft drink brand in continental Europe and overseas. Coca Cola is in the process of turning the switch from soda fountain to bottle: ” Drink Coca Cola in Bottles “

COCA COLA benefits from these 4 pioneers. In CC Soda-Fontains and from 1915 worldwide uniform in the Hobbleskirt bottle, CC becomes an affordable soft drink for 5 cents for humanity. The industrial bottle production (Owens since 1903) the invention of the Crown cork (W.Painter 1892) and not least the invention of the cooling units by Linde (1873) made the mark around 1900 to the ingenious start-up and the most well-known mark of our time (despite Apple) until today.

Cheers! My brew consists of 15 liters of water. 1000g ginger. 10 lemons. 100g brown cane sugar. For the starter, add ginger, sugar and water in a glass, feed daily and wait until it bubbles – depending on the room temperature, it may take a few days. Then bring the grated ginger to a boil twice and let it cool for one day. Add the ginger sauce through a sieve in 15 liters of water in the fermentation tank, then the starter. Add the juice of 10 lemons and 100g cane sugar. Mix well. Let cool for 2 days. Then fill in bottles. After about 1 week, the brew is ripe. Brown yeast has settled in the bottles. It is bitter and not suitable for enjoyment. taste it and believe it 🙂 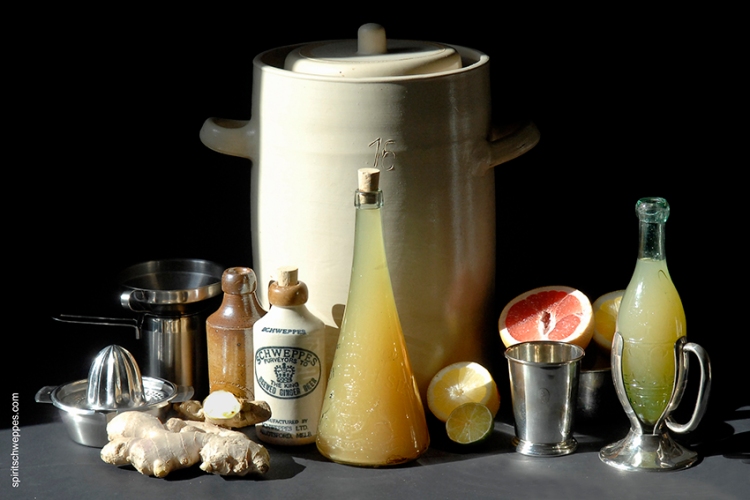 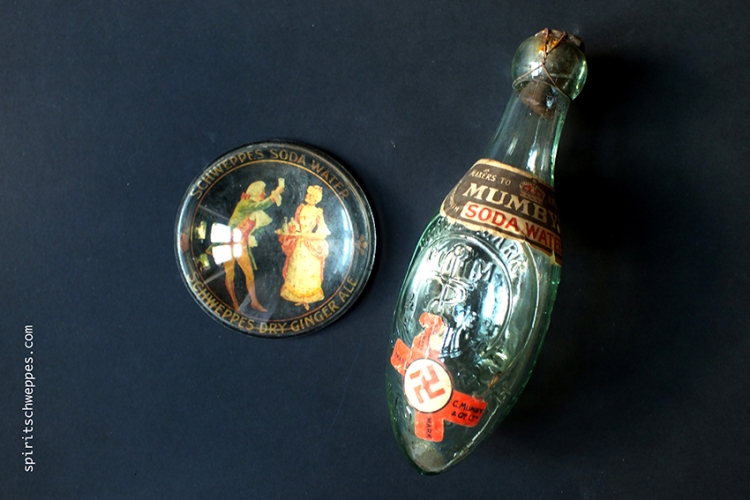 Cheers, I’m a brand maker by heart, a German collector of historical branded goods and owner of a marketing cabinet.

The English eggbottle with the swastika from 1890 is very rare worldwide and now part of my collection. I have the bottle in the international collector forums set and receive strong response to this story:

HISTORY OF A TRAGIAN DEVELOPMENT. C.Mumbys soda water maker in Portsmouth made a great marketing around 1890. The Aesculap staff for the medical healing promise was marked in the center of the bottle. Before the invention of the crown cork made the wire cork for the optimal tingling of the product. The neck label pointed to the court supplier of the king. An additional paper stopper showed the swastika from the old Indian Sanskrit. As an additional lucky charm to the sparkling experience of the new soda water. Known worldwide since 10,000 BC Since 1920/1933/1945, the swastika has received its negative connotation as a “swastika” symbolizing the greatest terror in the world to date, and wishing for an equally strong but positive sign of the unification of all forces for the salvation of our planet.

WANTED IS A SUNSHINE LOGO FOR THE FUTURE. IT SOUNDS CRAZY, BUT HUMAN IDEAS SHOULD START THIS WAY.

Hans-Jürgen Krackher Dear Marcus Dance, AUS, unfortunately this is the problem of marketing by concessionaires. J.Schweppe since 1783, Schweppe´s Ltd, Cadbury Schweppes, the British roots –  the values of the first real world brand – everything has gone. There is no longer a factory called Schweppes, and the Trade Mark belongs to the Japanese liquor company Suntory. Today, Schweppes products are produced worldwide by Coca Cola, Pepsi Cola or by large beer brands, in Germany by Krombacher Pils. This means, that the regional bottler of concessionaire brands do not feel passionately responsible for the history and value of the brand. So there is for Schweppes, with Spa and Selters the genetic “mother” of Coca Cola, no central corporate archive. Christian and I have taken over this job as private collectors and storytellers and – it’s a lot of fun as Davids between the Goliaths. 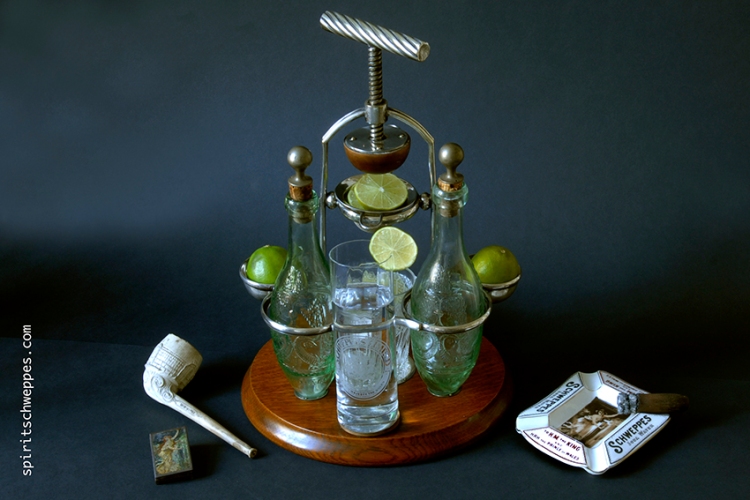 THE BIRTH OF THE “LIMEYS CLUB”. Horst Lichter’s “Bares for Rares” is the most popular antique show on German television. In January 2019 an original Schweppes decanter appeared there. Fitted with two eggbottles incl. cork stoppers: J. SCHWEPPE & CO.LTD • LONDON • EAUX ARTIFICIAL. • (fountain of great exhibition 1851) TRADE MARK. The experts and dealers could not agree on a purchase. www.spiritschweppes.com -storyteller Hans-Jürgen Krackher and his collector friend Christian Warnecke (No.1 Schweppes-Collector in the Guinness Book) reckoned the seller and agreed on the purchase. The original Schweppes decanter from about 1890 with embossing bottles in English-French is now a star of the digital spiritschweppes-collection. all nice followers are cordially invited to live-tasting at Hans-Jürgen Krackher’s Marketing-Cabinet in Potsdam / Germany. 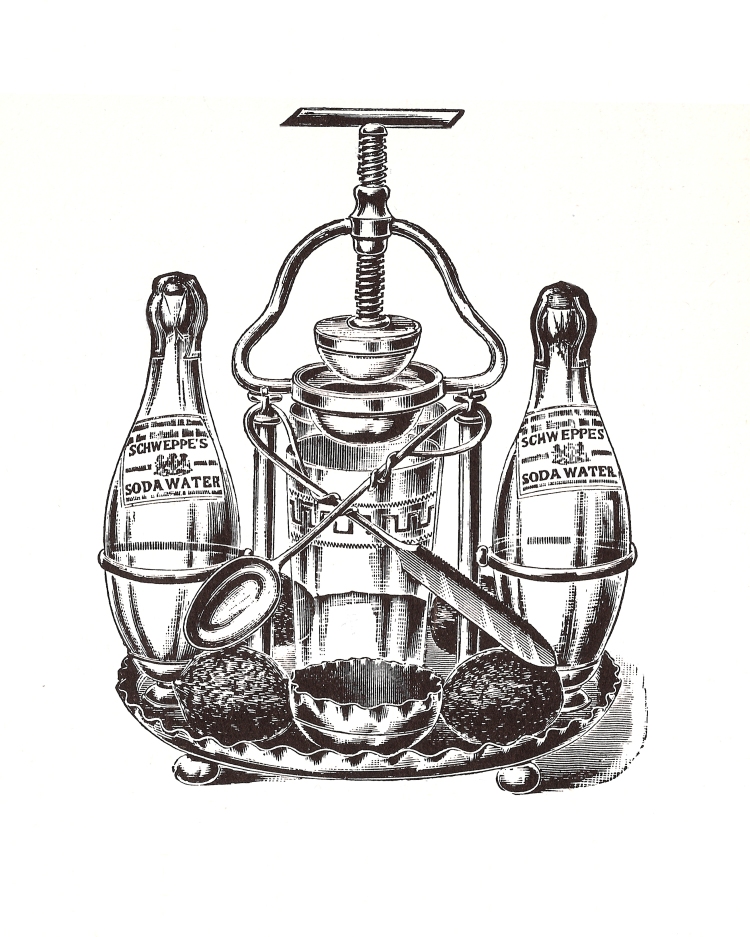 Horst Richters “Bares für Rares” by ZDF Zweites Deutsches Fernsehen, Germany. From Granny’s kitchen cupboard to a coveted collector’s item, every kind of junk is sold. The moderator mediates between the providers and traders and presents not only the often curious items, but also their owners. 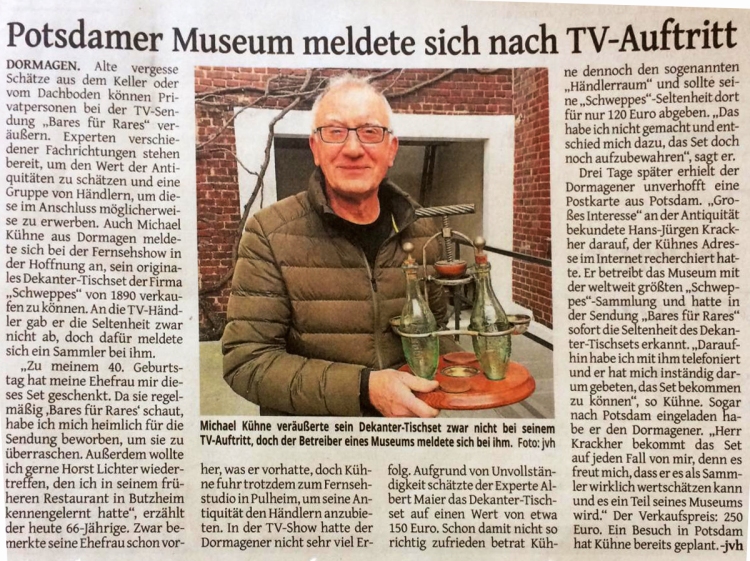 seller Michael Kühne as a storyteller in the daily press in the Rheinische Anzeiger, Dormagen / North Rhine-Westphalia 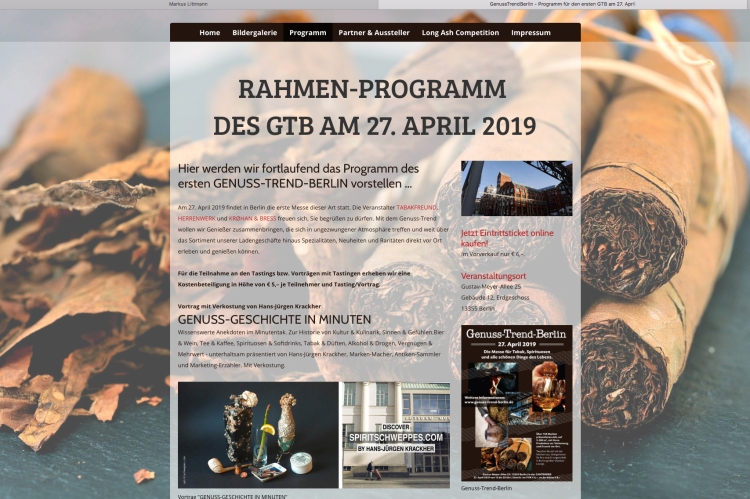 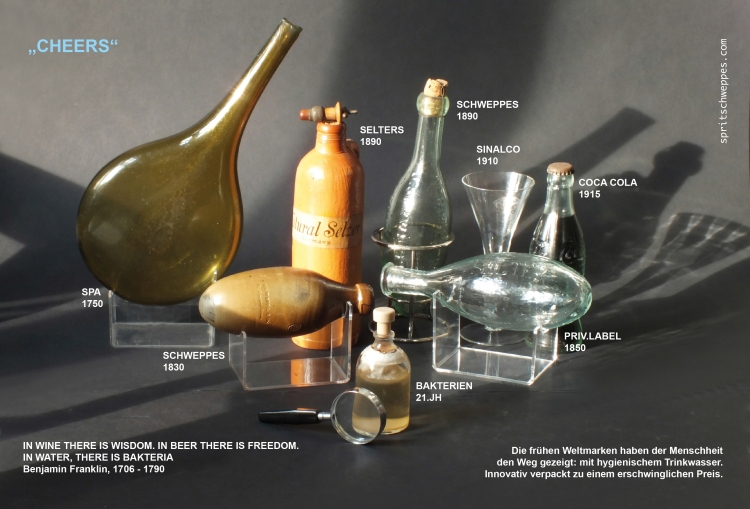 Yesterday on the 22nd of March the international WORLD DAY OF WATER has passed almost unnoticed. He had the guiding theme “leaving no one behind – water and sanitation for all”. As late as the 18th century, Benjamin Franklin, the American scholar, publicist and politician said: IN WINE, THERE IS WISDOM. IN BEER, THERE IS FREEDOM. IN WATER, THERE IS BAKTERIA. The photo from my marketingcabinet spiritschweppes.com should pay tribute to the historic drinking water pioneers. SPA 17 / 18C, SELTERS / SCHWEPPES 18 / 19c, SINALCO / COCA COLA 20c. These first global players in carbonated, hygienic drinking water have taken humanity a long way to the development of water and sewer systems (end19C). With safe drinking water at an affordable price – innovatively packaged in the world’s first bottles. In the foreground: water bacteria, made visible.

Surprising and interesting anecdotes every minute. On the History of Culture and Culinary, Senses and Feelings, Beer and Wine, Tea and Coffee, Spirits and Softdrinks, Tobacco and Fragrances, Alcohol and Drugs. For Pleasure and Added Value entertainingly. Presented by Hans-Jürgen Krackher, brand-maker, antique-collector and marketing-narrator. Tasting included. Cheers to Christian Warnecke, Guinness Schweppes Collector No.1, Hamburg END_OF_DOCUMENT_TOKEN_TO_BE_REPLACED